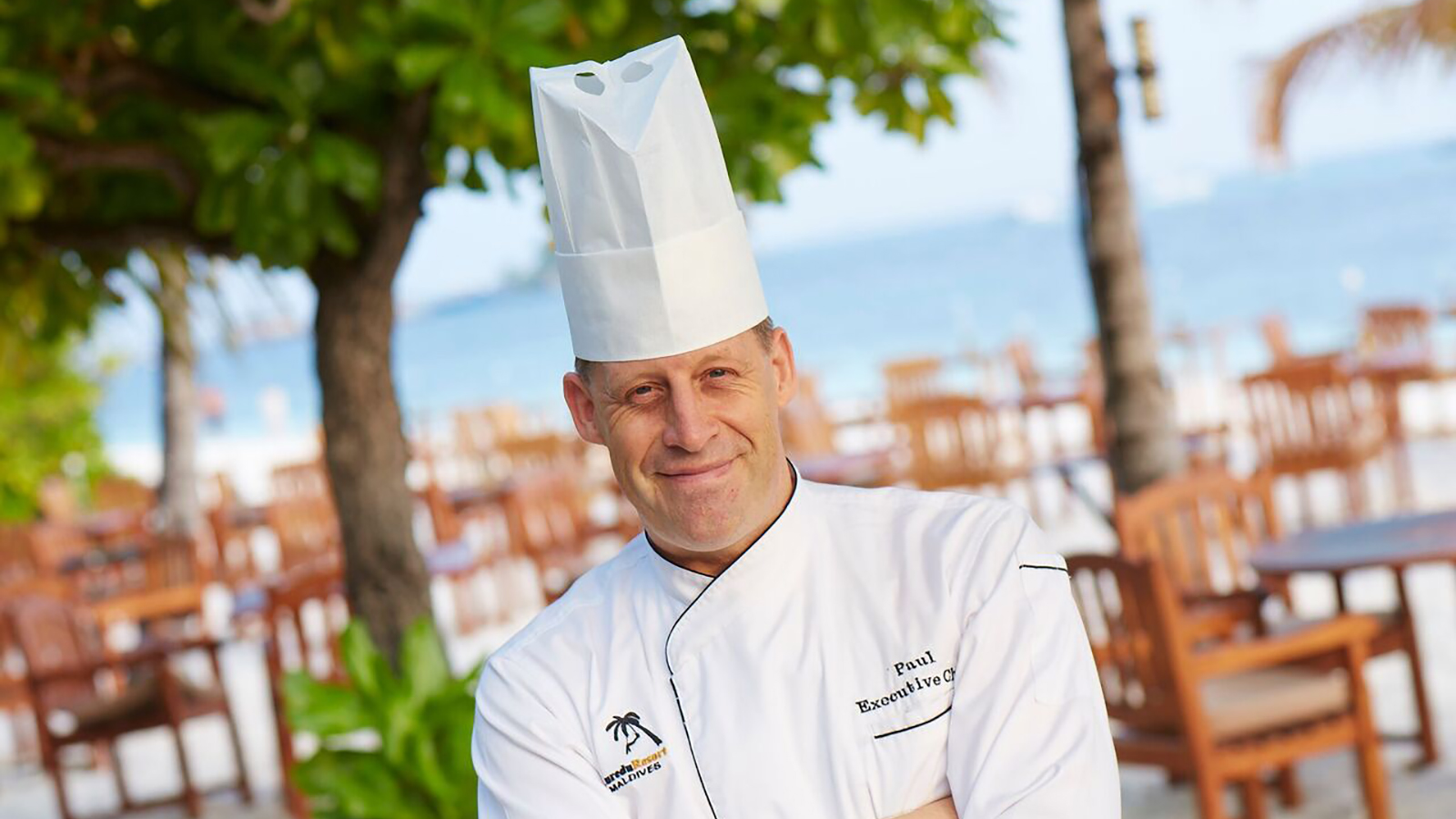 This edition of Kuredu Celebrities visits the kitchens of Kuredu to catch up with Executive Chef Paul King – not an easy task catching up with someone who could be pretty much anywhere on the island!

Paul Elliot King, a.k.a. ‘Chef’, joined Kuredu in June 2015 as the newly appointed Executive Chef having gained extensive experience living and working his way round South-East Asia. In his pre-travelling life he held positions at prestigious London hotels, the Savoy and the Dorchester, and had created fine gourmet dishes for royalty, politicians, film stars and musicians. One of Paul’s most memorable moments in his career was a one-to-one conversation, on a remote beach in the Maldives, with an incredibly famous 1960’s muscian about how he and his three other band members became very famous and the musician saying “‘Paul’ is a good name to have…” – we’ll leave it to you to work out who the musician was!

Fast forward to the present and Paul manages a department of 130 team members in four subdepartments: Kitchens, Stewarding, Green House and the Water Bottling Plant. He and his team cater for 850 guests and 800 team members in the 4 buffet restaurants, 3 a la carte restaurants and 2 team restaurants. As well as the day-to-day dining, Paul is also the man behind the private dining experiences and as the many guests who have enjoyed a Veli Dinner or Candlelight Dinner will agree, he knows how to put together a memorable dining occasion!

Kuredu’s special events such as the Gala Dinner on the beach and the very popular and successful Street Market are all planned and executed by Paul and his team. Behind the scenes he can even be found at the newly refurbished Chef’s Green House and Chef’s Herb Garden – making sure the ingredients of all the delectable dishes get off to the very best start. 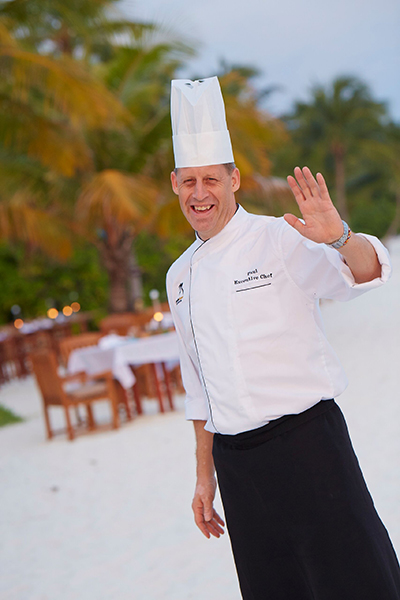 So, what does Paul love about his job here on Kuredu? Being part of a large operation, ongoing training opportunities for the team members, the freedom to change the menus frequently, great team work, time invested in group social activities, very good staff facilities and the high percentage of repeater guests – which is a compliment to the whole team. A key part for happiness in any job, and for Paul he’s found it on Kuredu, is work-life balance. He strongly believes in the ‘work hard, play hard’ ethos and by organising frequent social events for the kitchen team he encourages his staff to follow it too.

We know he ‘works hard’, but how does he ‘play hard’? Guests who are up and about before dawn might spot a lone figure running round the island not once or twice but two and a half times each morning – yes, that’s Paul! He also enjoys playing football, Muay Thai Boxing, scuba diving and socialising.

Originally from the UK, he’s been ‘on the road’ since 2002 and absolutely loves travelling and when he’s not on the island he likes to take himself off for back packing adventures and has back packed alone through Burma, Thailand, Laos and Malaysia as well as travelling all the way from North to South Vietnam on a 110cc moped. In his pursuit of experiencing different cultures and cuisines he will stop at nothing!

We asked Paul, quite the adventurer, what three things he would take with him if he had to spend 24 hours on an uninhabited island… ‘My sunglasses, suncream and drinking water’, …surprisingly no knives or fire making implements for cooking a castaway lunch…perhaps hoping to catch a tuna with his bare hands for some delicious sashimi?

We’ll leave you with Paul’s favourite quotes – they certainly seem to sum up his island life: ‘Happy Days, living the dream, let’s rock and roll’!

Why not pop along to our Facebook page and use the comment section to tell Chef Paul what you enjoyed most from your gourmet journey on Kuredu.